The Ryzen 7 5800X3D is AMD’s newest and most powerful processor. Boasting 8 cores and 16 threads, with the all-new 3D V-cache technology. But does that translate into better performance for gaming?

The Ryzen 7 5800X3D shares the same Zen 3 processor design as the ordinary Ryzen 7 5800X, and hence the same chiplet configuration that has made AMD’s latest generations of CPUs the most popular gaming processors in the market. That means you have the same eight-core, 16-thread configuration in a single chiplet (no inter-chiplet latency concerns), but a somewhat slower clock speed due to the lower voltage.

To add on to that, the original Ryzen 7 5800X has a base frequency of 3.8GHz and a boost clock of 4.7GHz, but this updated chip has a base clock of 3.4GHz and a boost clock of 4.5GHz. To maintain stability under load at lower voltages (1.35v vs. 1.5v), the clock speed must be reduced. This is also one of the reasons AMD has decided against overclocking the 5800X3D, as it gives more risks than potential gains as higher voltages can damage the 3D V-cache. However, base clock tuning has improved overall to bring out the best performance.

The Core Complex Die (CCD), the computational chiplet in the 5800X3D, has been redesigned thanks to a novel 3D packing technology. It’s a memory cap that’s about half the size of the chip it’s sitting on top of, but with twice the amount of L3 cache.

All in all, adding an additional cache to a CPU is beneficial in terms of gaming as it all comes down to a game having rapid access to its assets. Modern games feature enormous, and growing, pools of assets that must be loaded in a flash to provide a seamless experience. All of this must be loaded into and retrieved from memory. Cache memory is the nearest memory to the processor, thus anything stored there may be made available to the CPU immediately. If it isn’t in there, the CPU will have to waste time accessing the main system memory to retrieve the data. Simply said, if you have more of the faster, memory closely attached to the CCD: the L3 cache, game performance should improve.

Using 3DMark’s CPU Profile benchmark, we are able to show how the CPU clock frequency and CPU temperature change throughout a synthetic workload.

On a full 16-thread load, the Ryzen 7 5800X3D manages to sustain 4.4Ghz while running at 90°C. Changing it up to a single-thread up to eight-thread workload however it manages to sustain it’s rated max frequency of 4.5Ghz average, with temperatures at around 75-85°C.

Power consumption wise, using the Cinebench R20 loop, we were able to see a maximum 120W power draw from the CPU at the start of the workload, then evens out at 115W under full sustained CPU load.

We tested this processor in different games ranging from esports titles that require high frame rates and AAA game titles that prioritize visuals and eye candy. Comparing the performance of the 8-core Ryzen 7 5800X3D versus the 12-core Ryzen 9 5900X shows us a very interesting result: more cores and higher frequency do not always mean better performance..at least in gaming. The Ryzen 7 5800X3D’s massive L3 cache definitely gave more perceivable benefits in gaming performance as you can see in the results below. 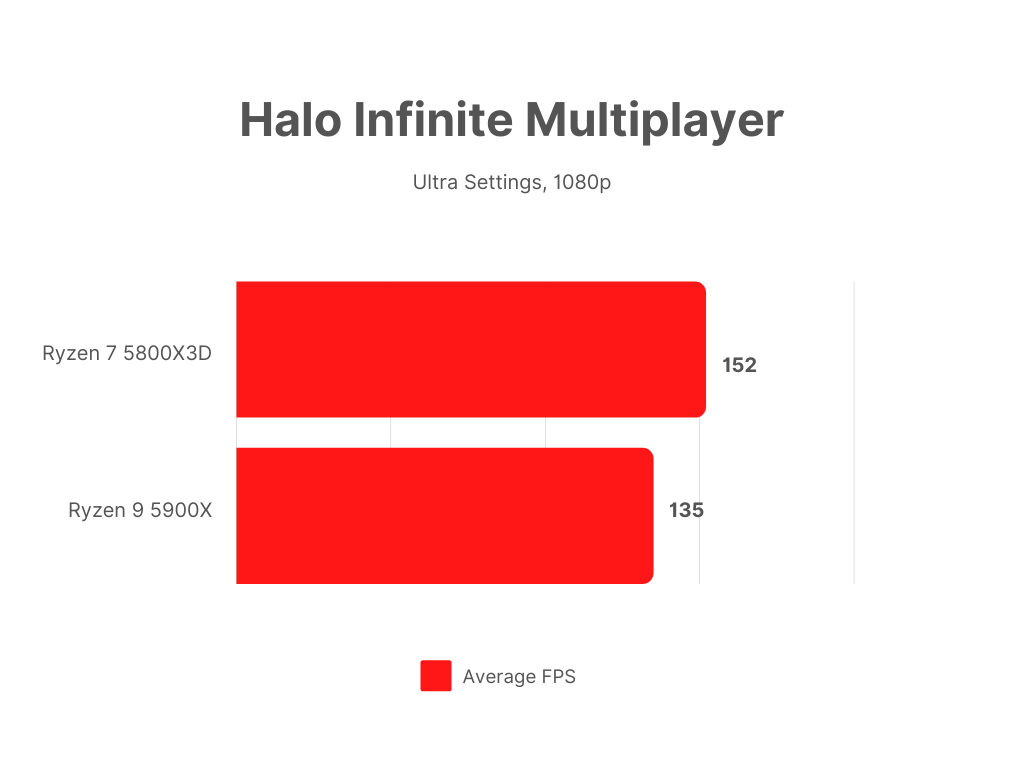 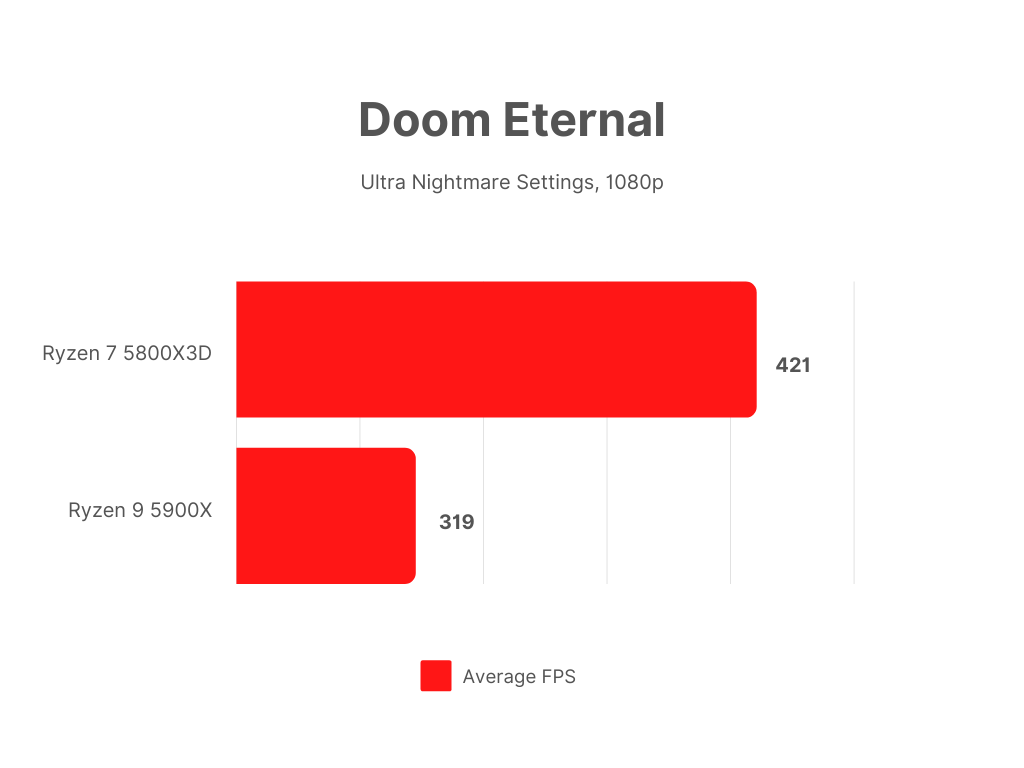 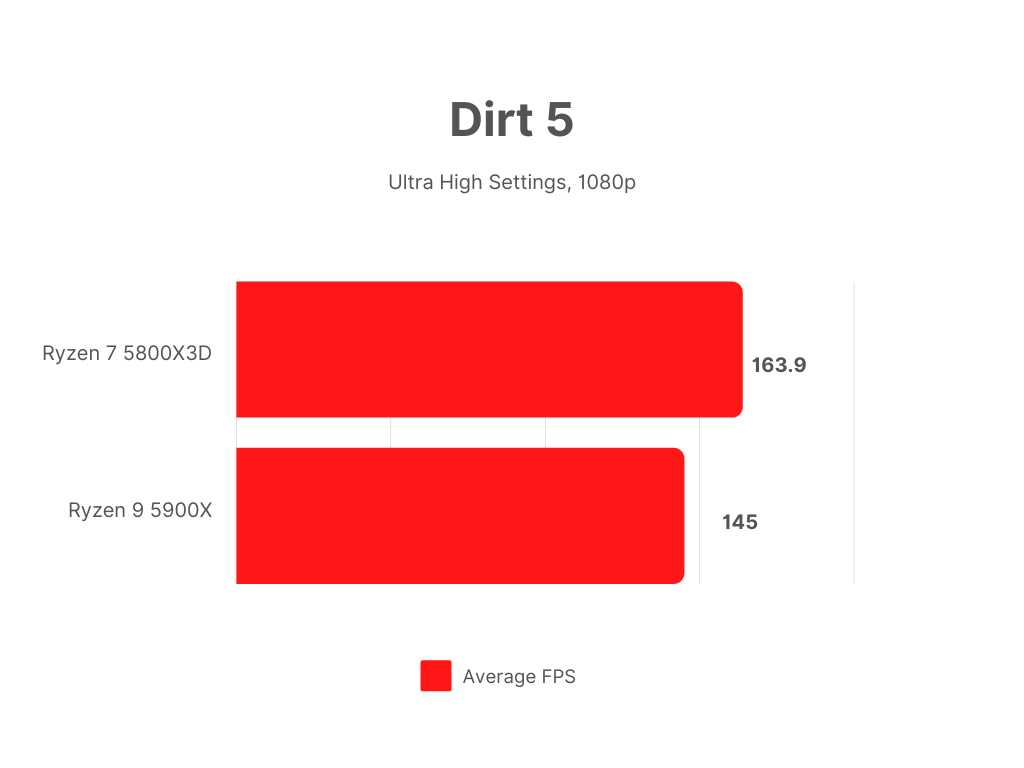 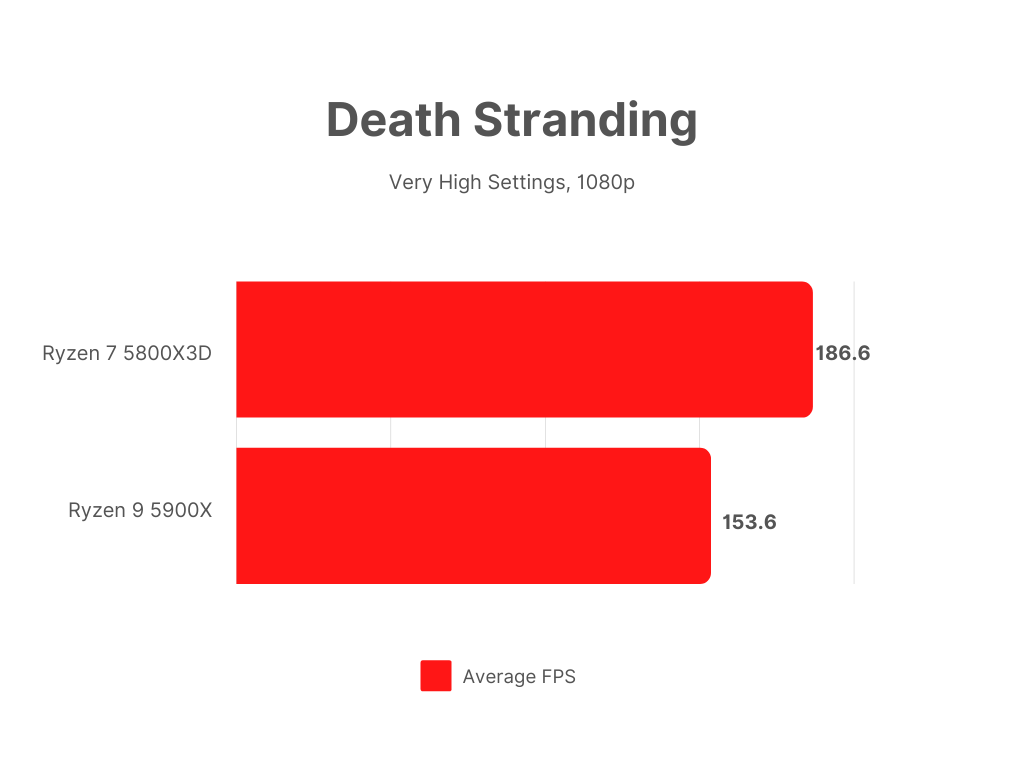 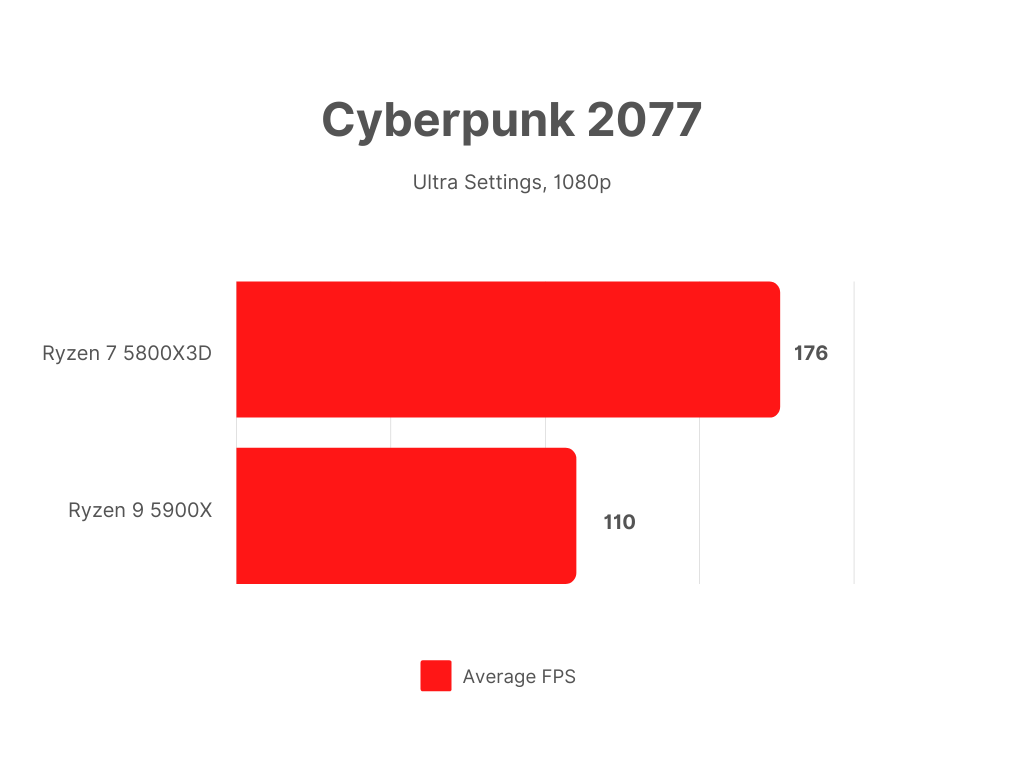 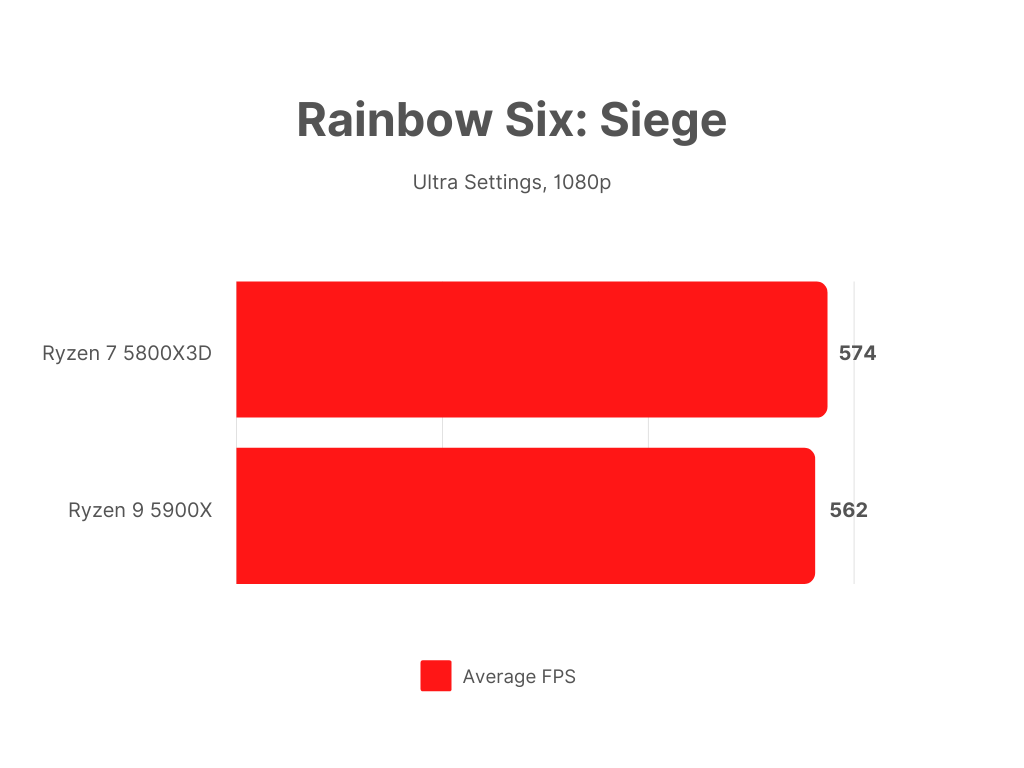 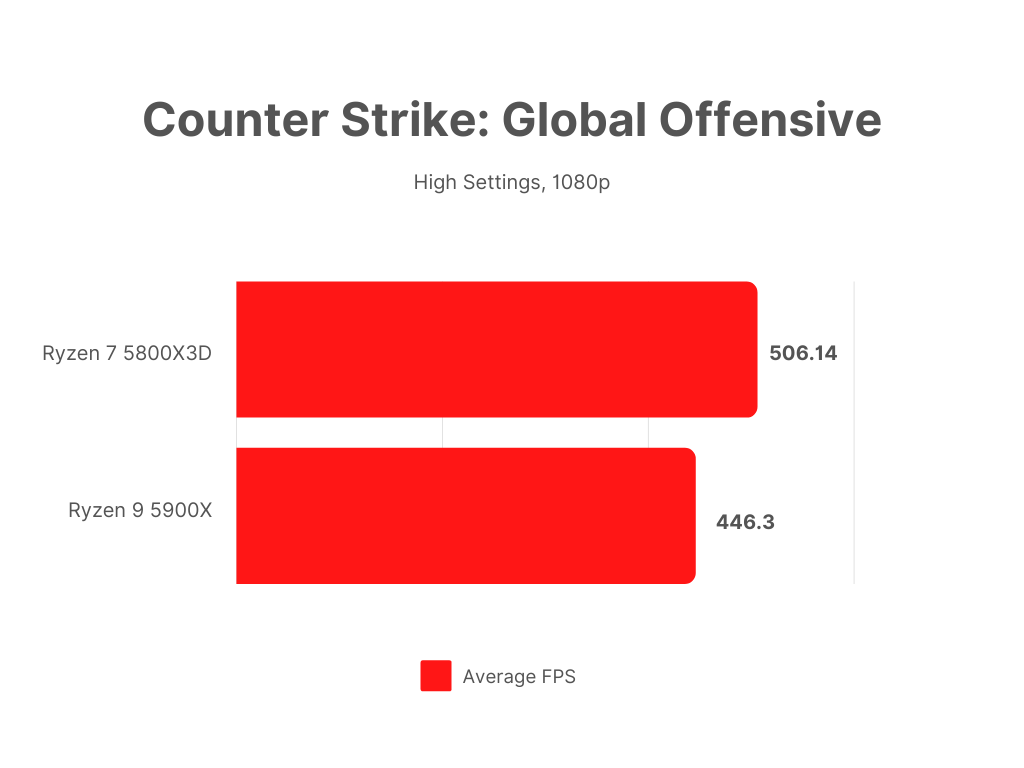 Gamers who are looking for the best processor coming from the 3000-series like the Ryzen 7 3700X should consider upgrading to the 5800X3D if they want to be able to pump out more frames in their games. There are some workloads that we didn’t take a look at here, however, like Video Editing, 3D rendering, and other creative applications. Although the addition of the 3D V-cache of the processor greatly improves gaming performance, it’s hard to see this reflect on creative workloads significantly, especially with those applications that scale up to more on CPU frequency and core count.

The Ryzen 7 5800X is no doubt a processor that offers great value for the money. We are impressed with the performance and features of the processor, and we recommended it to anyone looking for a powerful and affordable high-end option. With that said, we confidently give this an Editor’s choice award.

As AMD’s last hurrah for the AM4 socket, we are pleased with how this one performs. We have been able to journey all these years with Ryzen starting with the Ryzen 7 1800X in 2017 and we were able to see how each processor improved with each succeeding generation. AMD Ryzen has had a good run these past few years and we are looking forward to see how AMD will keep on improving their CPUs.