A couple of weeks ago, AMD unveiled the latest RDNA 2 graphics card in the lineup: the RX 6700 XT. It promises to solidify AMD’s graphics leadership in gaming by as an additional entry in their GPU family for mid-range gaming PCs.

In all honesty, these past few graphics card releases haven’t been too exciting as a lot of gamers are fairly disappointed about the availability of these new graphics cards (though that is going to be a totally different story in itself).

But here we are today with some piece of hope in terms of stock availability, and we’re bringing you a first look at what to expect with the brand new AMD Radeon RX 6700 XT.

Interestingly, the RX 6700 XT is packed with 12GB GDDR6 but only a 192bit memory interface. AMD clarified that the 192bit memory interface does not mean that the GPU will perform less; this is thanks to the 96MB Infinity Cache, which will effectively work alongside the GDDR6 memory interface to upscale gaming performance. This ultimately means that there will be no need to increase the cost for a 256bit or 512bit memory interface (as opposed to their NVIDIA counterparts), and it will use lesser power consumption. In theory, it will also be less attractive for GPU Crypto mining, which relies heavily on the VRAM memory bus.

Having much more VRAM is definitely a good real estate as gamers will be able to crank up their graphics settings and resolution much more than having a 6GB or 8GB graphics card. This, however, will not entirely mean that it will perform better in terms of raw gaming performance.

The rest of the press briefing deck of AMD elaborates more about gaming performance, and features such as Smart Access Memory, DXR Raytracing, Radeon Anti-Lag, and Fidelity FX, which are nice to have and these are some of the features that make AMD GPU’s unique in their own way.

With some of those details out of the way, let’s have a closer look at the Radeon RX 6700 XT in it’s RDNA 2 glory.

This time around, AMD went with a downdraft open-air cooler configuration much like the higher tier RX 6000 series GPU, but with only two fans. This is a welcome change as we found this to handle temperatures better than the usual blower-style coolers on previous generation reference graphics cards. It doesn’t look too bad, but I have some personal attachment to the classic blower-style coolers for some reason.

On the side of the card, you will find two standard 8-pin PCIe power connections. I’m still stoked and thankful that AMD went with standard power connections, as this would mean that people will not have to change their standard power supply (or cables, for that matter) that they have right now. Aside from that, it has the RADEON logo on the side, which lights up in red when turned on.

We put this graphics card to the test using our Ryzen system and compared our results with different graphics cards. Our system configuration is as follows:

For this review, we decided to go with 1080p gaming benchmarks purely. We had a good mix of AAA and esports titles in the lineup using DirectX 12 API on all games (when available) for consistency. We also decided to include synthetic benchmarks as this will give us a big picture of where to position the RX 6700 XT among the stack. Still, they are in no way representative of realistic gaming performance.

We pitted out the RX 6700 XT in 3DMark Timespy, which shows that this Radeon GPU can expect performance within the margin of other 1440p cards in its class.

3DMark also shows us the behavior of the GPU during its benchmark run. Here we can see the RX 6700 XT topping out at 84C while maintaining its GPU core clock above 2400-2500mhz. Its memory frequency, on the other hand, retains above 2400mhz clock speeds. Awe-inspiring performance as it maintained 77FPS on Graphics test 1 and 66FPS on Graphics test 2. TDP, on the other hand, was well within this card’s 230w board power consumption.

Ray Tracing performance is nothing much to write home about, as shown by 3DMark Port Royal, but in 1080p gaming, it is expected that DXR Raytracing performance should be well within acceptable frame rates. With limited games right now supporting DXR Ray tracing with AMD GPUs, I hope to have a full-blown portfolio of AAA Game titles that AMD will support for this feature in the next few months. 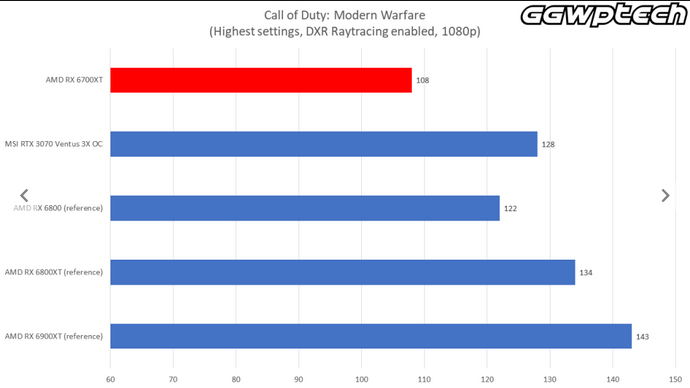 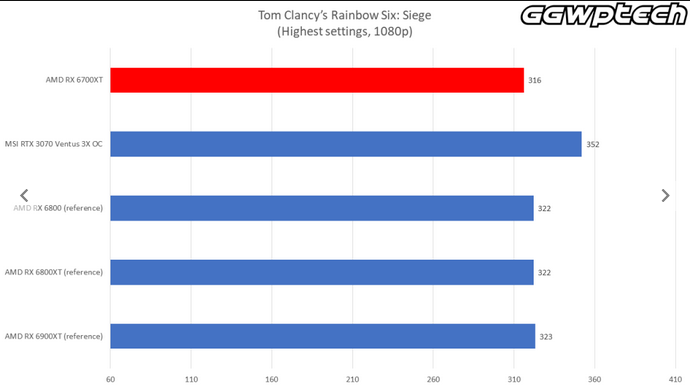 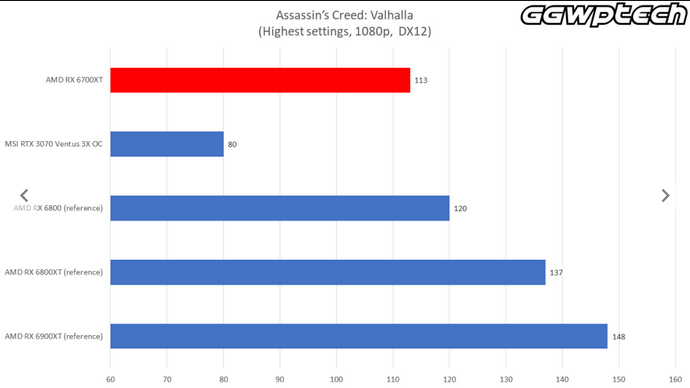 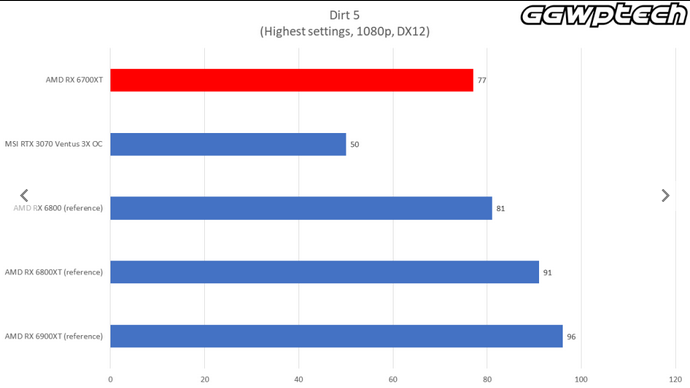 The gaming tests, on the other hand, shows the bigger story in terms of performance. In Dirt 5 and Assassins Creed Valhalla, we get to see the RX 6700 XT blasting away versus the RTX 3070 from NVIDIA.

In the esports title Rainbow Six: Seige, however, the game engine favors the NVIDIA graphics card. Nonetheless, we could reach above 300FPS average with the RX 6700 XT, which makes this card a viable option for esports gamers with monitor configurations beyond 240hz, especially if they would be using Freesync and Radeon Anti-lag to further up their competitive advantage.

In Call of Duty: Modern Warfare (or just Warzone now, haha), the RX 6700 XT beats the RTX 3070 but not by a lot. However, turning on DXR Raytracing, we see that NVIDIA’s ray-tracing hardware fares a lot better in this game. Again, for competitive gamers who want to achieve going above 144hz without DXR Ray tracing, higher FPS is possible with the RX 6700 XT with the right graphical settings.

Given what we know so far, AMD is on the right track in providing great gaming hardware for gamers. The Radeon RX 6700 XT is a pretty good graphics card, and you should buy it if you can. It does really well what it’s intended for= high-end gaming.

But given the graphics card supply’s current situation, I’m not expecting it to hit much popularity. Even if AMD gave their own MSRP for the RX 6700 XT, it wouldn’t matter much since every local dealer and distributor in the Philippines are on crack right now, with their high GPU prices. We’ve been told that it’s pretty much open SRP right now, and no one can do about it. Not unless both AMD and N