The AMD Radeon RX 570 is the tweaked version of the RX 470 and still uses the same Polaris architecture of AMD’s high end gaming graphics cards.

MSI packaged this graphics card in a box with the distinct ARMOR branding in the front and the usual product specifications behind the box.

The package comes with the graphics card itself, the usual paperwork like the “Thank you” card and user’s manual, a driver CD, a few MSI stickers, and a really cool “Lucky the dragon computer workshop” comic booklet. 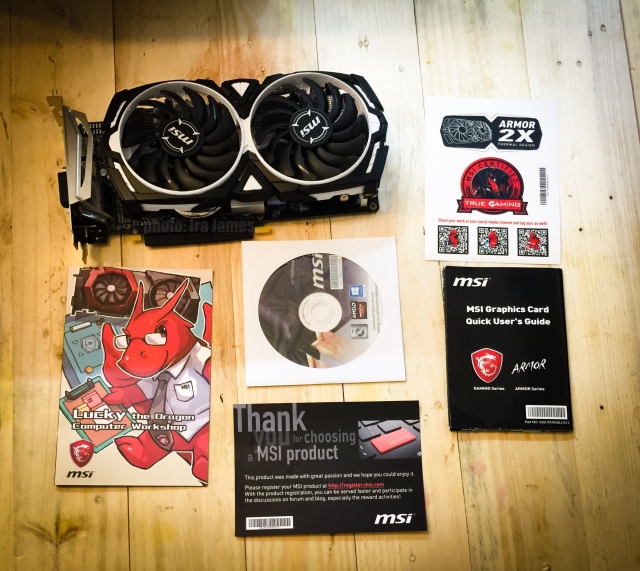 This MSI RX 570 ARMOR 8G OC is equipped with a huge heatsink with nickel plated copper heat pipes and two MSI TORX fans which provided excellent cooling performance. A notable feature of MSI graphics cards is the ZER0 FROZR feature which eliminates fan noise by literally stopping the fans in low-load situations. When idle, the GPU temperature is around 33°C-35°C. During most of our gaming tests, the graphics card was kept at pretty decent temperatures ranging between 60°C-65°C, with the scorching ambient temperature of 35°C. Unfortunately, the fans are very loud when set to 100%.

A generous amount of video outputs are provided: 1x HDMI, 1x DVI-D, 3x DisplayPorts. You can have a maximum of 5 displays utilizing AMD’s Eyefinity technology.

A single 8-pin PCIe power connection is required and it is recommended to use at least a 450w power supply. 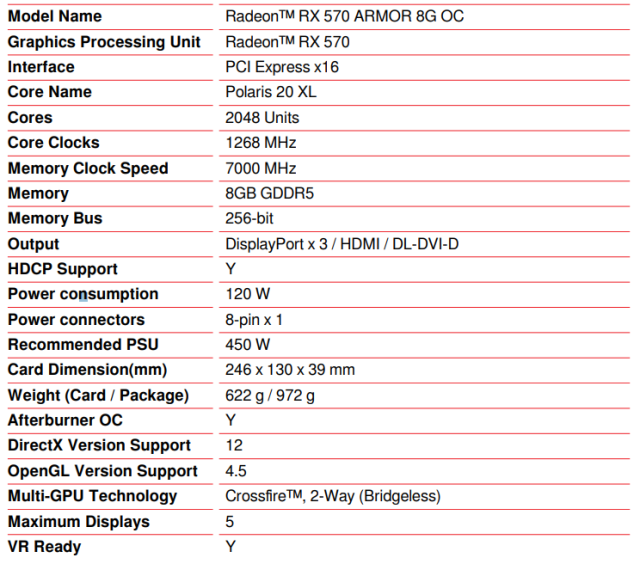 Here is the list of hardware we used for benchmarking the GPU:

There was a mix in performance results between the two graphics cards but in gaming performance, the RX 570 was really close to the performance of the GTX 1060.

Sure enough, the 8GB video memory is more than enough to bring your high end games to the highest possible presets in 1080p and still maintain a decent frame rate and the RX 570 does not disappoint in this aspect.

Nonetheless, the MSI Radeon RX 570 ARMOR 8G OC is definitely a graphics card to consider if you’re looking for something that is relatively quiet and can handle it’s own temperature without compromise on fan noise and graphics performance.

Ira James
Ira James is an enthusiast who has his roots on PC hardware and gaming. His career as a tech journalist began after working in the PR industry for two years. He started GGWPTech to write PC hardware reviews, gaming, cyber security, and enterprise tech news. His works are also syndicated by other media publishers: Tech Sabado, and the Sunday and Business I.T. section of Manila Times.

“The ROG Claymore is definitely something to consider in buying if modularity and maximum usage peaks your interest – a premium modular keyboard that is user friendly and easy to adjust to..” Keyboards have been something important in the tech industry – It was more than just a peripheral. and in the times of innovation […]

Today is the official launch of the much anticipated 2nd Generation AMD Ryzen processors, which been made available for global pre-order earlier this week. These new line up of processors are optimized for gamers, creators, and hardware enthusiasts available at various price points. The new CPUs include: Ryzen 7 2700X, Ryzen 7 2700, Ryzen 5 […]

A high refresh rate with a boosted 2k resolution which is a step up from the standard 1080p experience – Freesync and HDR support is just an icing on top of this rather sweet cake; a curved cake in this case.